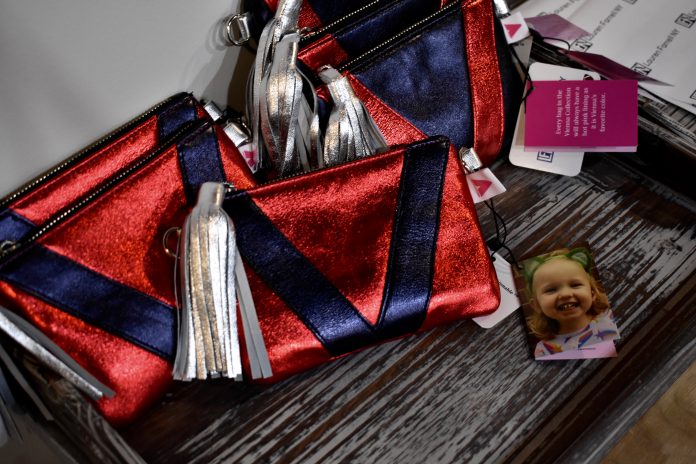 When one combines passion with an entrepreneurial spirit, fashion and a generous dose of a mother’s unconditional love, the result is “the magic of Vienna.”

Vienna Savino, or “V3,” as her mother, Dr. Denise Wunderler of Holmdel, calls her, was described as a magnetic 2-year-old girl with an avant-garde sense of fashion – even for a toddler.

Vienna was admired for an intrinsic warmth that was, arguably, uncharacteristic in a child of her young age. But then again, Vienna was said to have not been like most 2-year-olds.

During an interview, Wunderler said her daughter, her third born child, died abruptly in November 2017, two months short of her third birthday.

Wunderler said Vienna’s death was the result of Sudden Unexplained Death in Childhood (SUDC), a rare category of death Wunderler said claims the life of at least one child between the ages of one and 18 each day in the United States.

Since Vienna’s passing 15 months ago, Wunderler said she has worked tirelessly to bring awareness to a category of death most people are unfamiliar with until they may be forced to become familiar.

Wunderler, who is a team physician for U.S. volleyball, said she and her husband, who is also a physician, never learned about SUDC in medical school. She said the obscure category of death and its absence from medical education was alarming.

Wunderler said her devotion to SUDC awareness has recently been rerouted by “the magic of Vienna.” Less than two months ago, she said, Wunderler was introduced to sports-oriented fashion designer and entrepreneur Lauren Farrell of Lauren Farrell NY.

Together, the “dream team” designed the Vienna Collection. From now through Feb. 28, a line of handbags created to honor Vienna and spread SUDC awareness will be sold at a pop-up location inside Bell Works, which is located at 101 Crawfords Corner Road, Holmdel.

A portion of the proceeds from the collaborative effort that took just six weeks to prepare from idea to sale will go toward SUDC awareness and research.

“We know how to hustle,” Farrell, 27, laughed during an interview with Wunderler in her pop-up shop at Bell Works.

“We were put in touch and to hear (Wunderler’s) story was truly heartbreaking,” Farrell said. “In my head, I said, ‘How does something so horrible happen to such a wonderful person and family?’ ”

Farrell, who said she has been babysitting since she was 11, said she “has a soft spot for kids.” Once she heard Vienna’s story, Farrell made it her duty to help Wunderler, noting that initially she did not know how she could help the family.

“Flash forward a couple of meetings (with Wunderler) later and we decided to launch a Vienna Collection. We are honoring her in a way that not only captures her personality, but also keeps her memory alive,” Farrell said.

Farrell said Vienna’s personality is accentuated in the purses’ finer details, like the hot pink lining (Vienna’s favorite color) and a small logo tag fastened to the outside of each purse. The purses – Italian leather wristlets and cross body bags – are adorned with a metallic “V” at the center.

“(Vienna) was one of the most fun-loving and free-spirited little girls ever,” Wunderler said, showing a photograph of her daughter dressed in a pink Rutgers University jersey, red pants, a one-piece bathing suit and her older sister’s metallic gladiator sandals.

“She did that herself,” Wunderler said. “She went to preschool (dressed) that way and I never stopped her.”

Wunderler said Vienna had a playful sense of style, noting that the toddler would change her outfit several times each day. Although she was only 2, Vienna’s desire to creatively dress herself with mismatched garments was representative of her free spirit, Wunderler said.

The “V1 Exclusive,” a metallic turquoise and magenta purse included in the collection was designed by Vienna’s 8-year-old sister. Wunderler said the special purse was modeled after the color of Vienna’s favorite genie dolls. The dolls had vibrant blue and magenta hair.

“We brought the dolls down from Vienna’s room and matched (their hair) perfectly with the leather,” she said.

Wunderler called the design process that went into the Vienna Collection natural.

“Lauren asked how we could incorporate Vienna’s spirit into the bag. That’s where it all started … Lauren Farrell NY’s logo is usually on the inside of the bag, but with this collection, we thought, ‘well, this a Vienna bag. We don’t want to just show off the big ‘V.’ We included the halo on the outside tag,” Wunderler said. “(The logo) is nice, beautiful and simple, and it says a lot with the halo. Obviously, it’s very personal. That’s how I sign her name.”

Farrell, who made a name for herself in the world of fashion in her early 20’s, said she will continue to produce new variations of the Vienna Collection for as long as her brand remains active.

“I want to take fashion and flip it on its head in every sense and this is another way (to do that),” Farrell said. “Already, I’m doing things differently. All of my items are made in the United States.”

Farrell, who was hit by a car when she was 4, said the accident left her unable to participate in athletics beyond a young age. She said she always had a passion for sports and decided to pursue a sports oriented fashion line.

A portion of the proceeds from the bags in the Vienna Collection will be donated to Wunderler’s new foundation, Team Vienna 4 SUDC Awareness Inc.

According to the foundation’s website, “SUDC is a category of death in children, adolescents and teenagers that remains unexplained after a thorough investigation, including an autopsy, a child/family medical record review, and a death scene investigation.”

“(Children affected by SUDC) are seemingly healthy kids,” Wunderler said. “In most stories, (the kids) fall asleep and they don’t wake up … These kids could be completely healthy, they won’t even have a sniffle.”

Wunderler said Vienna’s blood and brain tissue, along with Wunderler and her husband’s blood, have been sent to NYU Langone Medical Center for genetic testing where advancements in SUDC could be made.