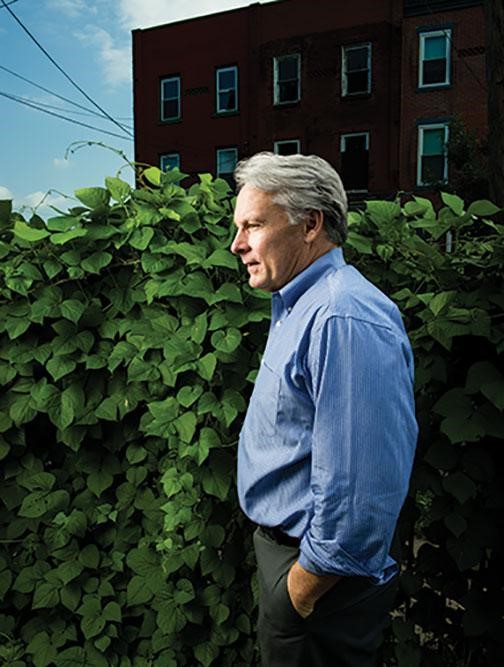 Everyone has a story to tell – except for Marty Johnson, founding CEO of Isles, an urban sustainable development organization in Trenton.

A renowned superhero of the war against poverty in Trenton, Johnson, in fact, has a book to tell, an encyclopedia of moving personal and institutional stories that reflect non-profit organizational innovation and entrepreneurial chutzpah, perseverance and commitment to improving the lives of those overwhelmed by poverty.

Johnson is actually writing that book on the occasion of his early 2020 retirement from the leadership position at Isles, which will be honoring him at a Nov. 16th fundraiser – four days after his 60th birthday.

The book is just the first chapter in the next chapter of his life.

Going forward, Johnson, a Princeton University alumnus class of 1981 and longtime resident of Trenton, is committed to sharing with others what he has learned. His 38-year journey has had bumps and road blocks, but nothing deterred him from building a community development organization that has transformed and continues to transform the lives of thousands of Trenton residents, while literally transforming the landscape of the community.

“Simply put, our goal is to help people help themselves,” said Johnson.

Isles fosters more self-reliant families and healthy sustainable communities by offering an array of services  – homeownership, financial capability, environmental health, community gardening and youth education. The organization helps residents navigate the complex issues by making connections, bridging silos across our services to ensure they are aware of all the resources available to them.

“We provide support by providing the right tools, honor people’s dignity and then get out of the way,” said Johnson, noting that he actually will be getting out of the way as he transitions out of the day-to-day management operations of Isles.

“But I will continue to write, teach, consult …. I want to take what we have learned over the past several decades and communicate it in a way to broaden what Isles has accomplished in Trenton.”

Another message he hopes to convey is the need to be regionally connected. Yes, it takes a village, Johnson said, but he believes it actually takes a region to improve environments. Because of his Princeton University connections, Johnson understands how those institutions with an abundance of resources are in a position and should feel morally obligated to help not only their own host communities, but also other distressed communities within their respective regions.

I first interviewed Johnson, a native of Akron, Ohio, very early in his journey – shortly after he graduated from Princeton University in 1981, when his social service vision to fight poverty in Trenton was taking shape. It was a time in his life when he had no money, but was turning down lucrative corporate job offers (“the starting salaries were more than my father ever made,” he said.) in order to help others who had no money.

He was working as a garbage collector at the Princeton Forrestal Center and living on donated food (expired expiration dates) from the Whole Earth Center, while he and two colleagues were taking the concept Johnson had articulated in a senior thesis and making it a reality.

“I acknowledge, however, that my way is not the only way to accomplish sustainable initiatives dealing with overcoming poverty. I earn what a public school teacher earns and have stared at poverty many times during the course of my working life. My son is a millionaire but is no less committed to finding sustainable ways to improve the lives of others. He will do good things for society. His pathway and my pathway are equally legitimate and appropriate – just different,” Johnson said.

How Marty Johnson even managed to get Princeton is a compelling story unto itself.

“When Bob Casciola and his football coaches from Princeton University came to recruit me in Akron, Ohio in 1976, they were interested in a fullback for their I-formation offense – with decent grades. Luckily, they didn’t much care about my family’s financial struggles, a single parent household headed by my ailing mother in a body cast, the food stamps in our pockets, or my younger brother and sister often wondering why our father had basically left us to fend for ourselves.

“I had never been to the east coast or on a plane, and I agreed to fly to New Jersey for a weekend visit. Despite my deep questions about what a kid like me would do in a place like Princeton, I agreed to apply.  It was a beautiful campus, the right size football program, and a good reputation – even in Ohio.  I decided to apply for admission, and the application gave me the chance to write about my favorite book.

“I chose ‘Siddhartha,’ by Herman Hesse. I could relate to Siddhartha, who had the tools and knowledge to be rich, but grew deeply skeptical of the value of material wealth. To build a good life, one needed only the capacity to think, fast and wait – not wealth. ‘I can do those things,’ I wrote in my essay…. The premise that you could do anything if you had the right life’s strategy was very important to me. It gave me a sense of control over my life which seemed very out of control.”

He was admitted to Princeton University, and he has built a good life for himself and for others. Raising his family in Trenton, Johnson and his wife Liz, also a longtime partner in the Isles initiative, have three grown sons, and expect to greet their first grandchild in December.

I anticipate that someday in the near future, a potential Princeton student perhaps his grandchild may be writing about Marty Johnson’s book as source of wisdom guiding him or her in the direction of doing the right thing for others.