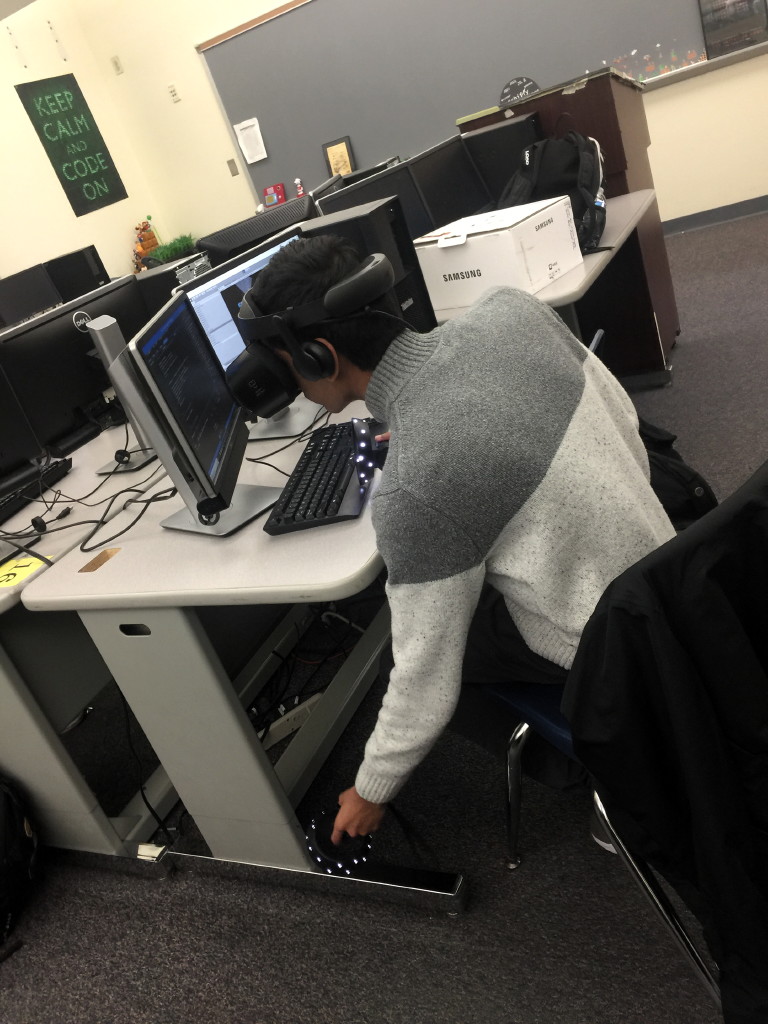 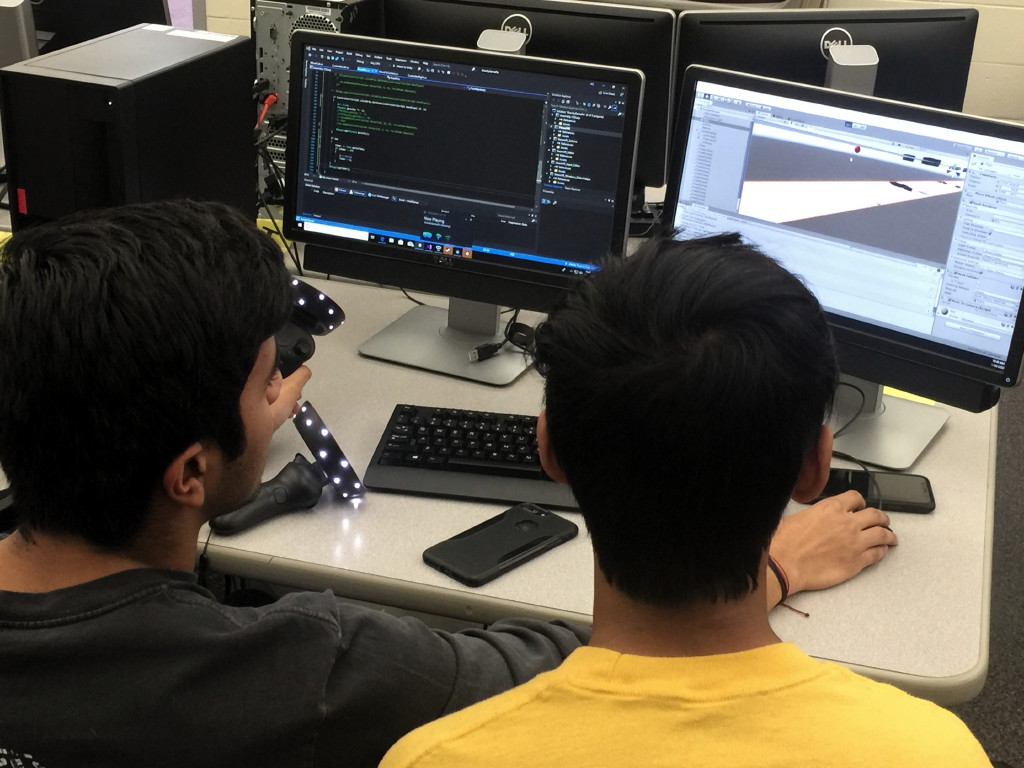 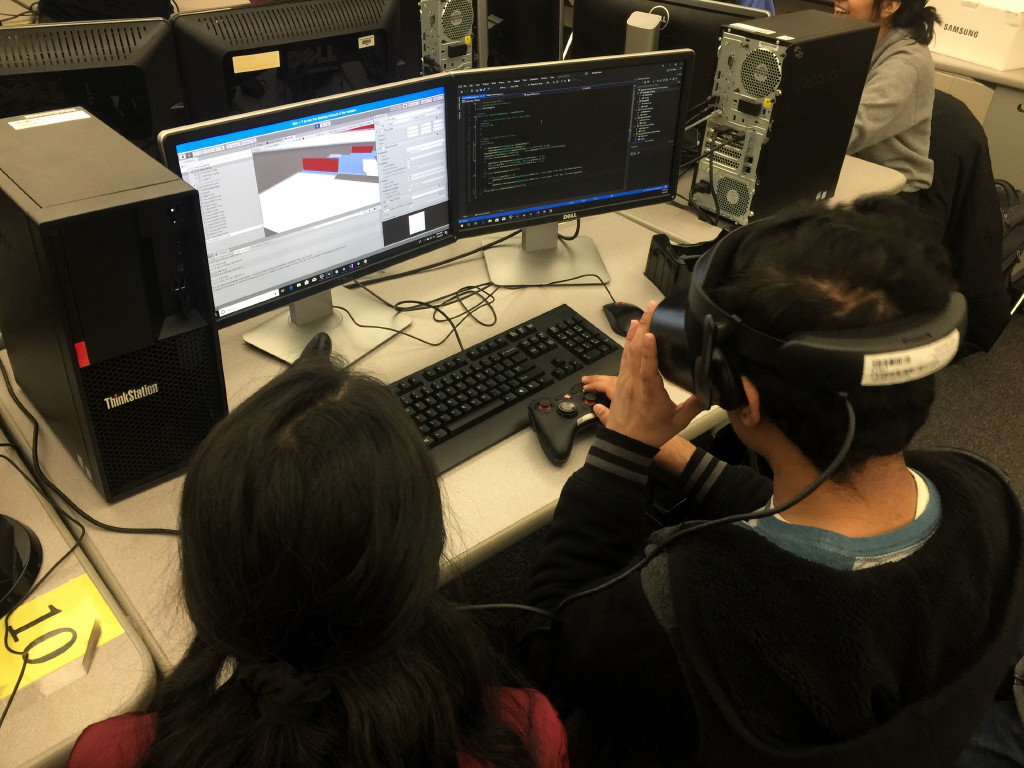 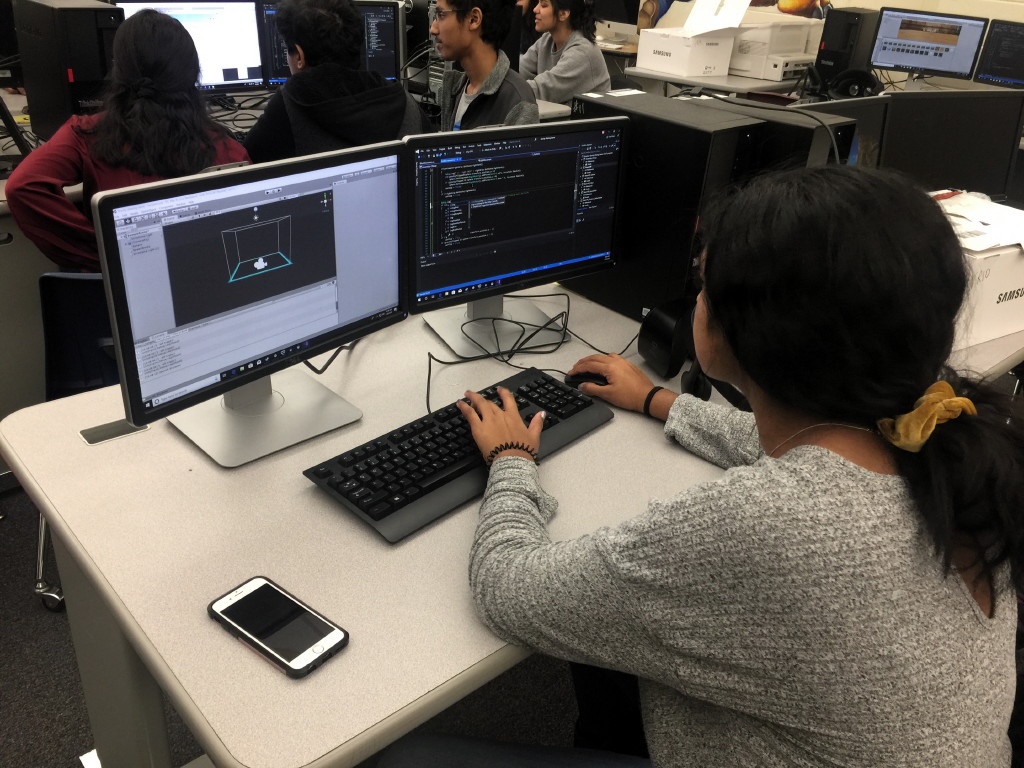 The students meet 1 hour and 20 minutes every other school day to work in pairs on their projects.

For the bowling game, students code instructions for the ball mechanics, pin reset, pin arrangement, etc. They download “assets,” or objects, that were created by artists and 3D modelers, some of whom were nice enough to provide their work for free because this is an educational setting, Schiff said. Unity is the company that provides the asset store; it is just like the Apple store or Google Play store.

When the player moves the controller, just like throwing a real bowling ball, the instruments take the velocity and physics of the ball on screen and transfer it, enabling it to travel down the alley and strike the pins. It measures physics elements such as dynamic and static friction co-efficients, for example.

Using professional tools, “we can build a game and release it. These are not educational tools, but development software used in the industry,” Schiff said.

For the infinite runner game, students can change gravity as they move a ball forward, dodging objects that are flying toward them. They have the ability to jump; or, if something is impassable on the bottom, they can travel along the top plane.

Schiff said the teams on this project can alter the game; for example, they can manage how far they can go without falling off the end, or they can make the game extend further into the horizon.

“The coding is really advanced and I think they enjoy it a lot,” Schiff said of his students. “They’re invested in it, and are able to communicate with each other about very complicated and detailed material.”

For the space simulation, assets fly toward the player, at which he/she can shoot. In one instance, a team made their own models such as elephants, stick figures and random art. The player is the spaceship, firing missiles at the assets.

“The nice thing about virtual reality is it can come from all around you,” Schiff said.

The students can also debug the programs as they move along.

“When things are in 3D space you need ways of manipulating them,” he said.

Virtual Reality and Game Design follows the Advanced Placement computer science and mobile application development courses offered at the school, and are all college-level courses.

“They’ve had substantial coding experience,” Schiff said of the juniors and seniors he teaches. “We have a lot of really cool courses a lot of other schools don’t have. … They’re definitely technical but also relevant.”

The school also has a Computer Science Club afterschool, where the student members formulate the lessons.

The school will host a Hackathon for 24 hours from April 4-5 in which high school students from the area can build projects and get judged for prizes. Participants do not necessarily need a background in coding. There will be workshops and activities for children. About 200 students are expected to spend the night in the cafeteria with their laptops, creating websites, apps or virtual reality games.

“It would be hard to find a kid right now who doesn’t like technology,” Schiff said.