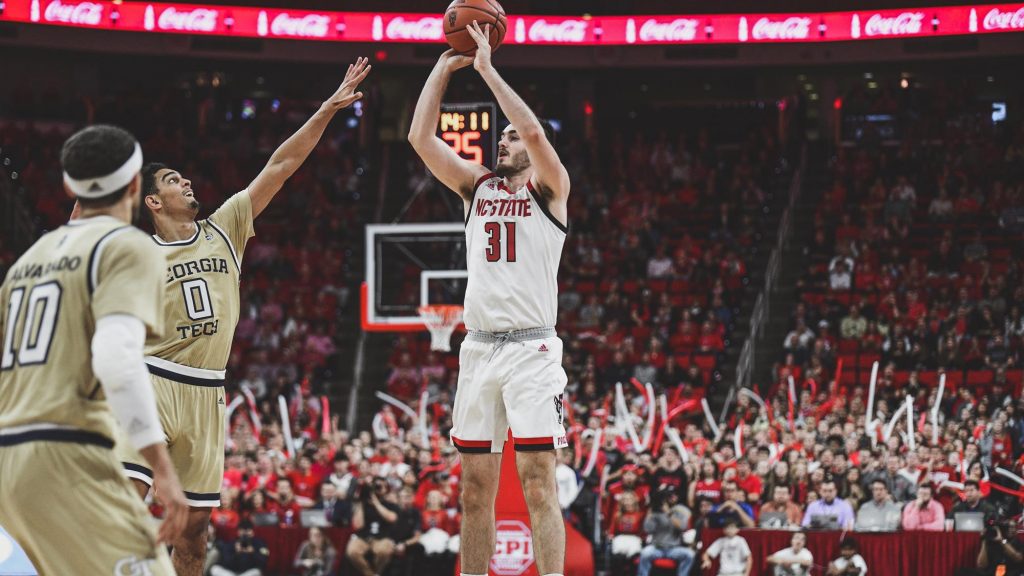 Christian Brother Academy graduate and North Carolina State University men's basketball player Pat Andree shoots a three-pointer during a game against Georgia Tech this past season. It was announced on April 16 that Andree had signed with the sports agency IPZ to help him in his pursuit of playing professional basketball overseas.PHOTO COURTESY OF THE NORTH CAROLINA STATE UNIVERSITY ATHLETIC DEPARTMENT
× 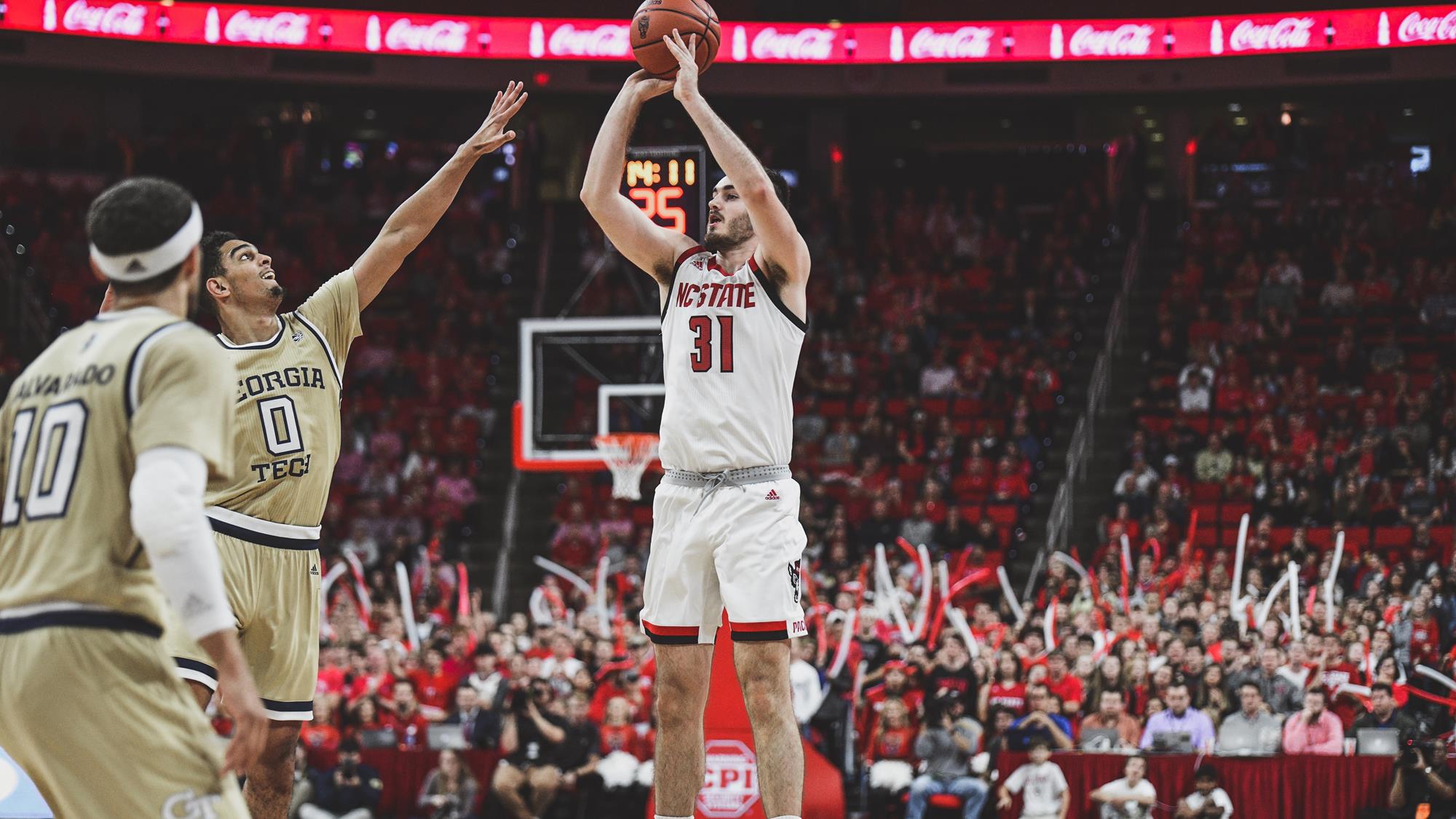 Christian Brother Academy graduate and North Carolina State University men's basketball player Pat Andree shoots a three-pointer during a game against Georgia Tech this past season. It was announced on April 16 that Andree had signed with the sports agency IPZ to help him in his pursuit of playing professional basketball overseas.PHOTO COURTESY OF THE NORTH CAROLINA STATE UNIVERSITY ATHLETIC DEPARTMENT

Pat Andree is gearing up for the next chapter in his basketball career. Andree, a native of Colts Neck, has signed with the sports agency IPZ and is preparing to play professional basketball overseas.

Andree is the all-time leading scorer at Christian Brothers Academy, Lincroft. He concluded his scholastic career with 1,984 points.

After talking with representatives of several sports agencies once the 2019-20 college basketball season came to an abrupt end with the outbreak of the coronavirus pandemic, Andree said he decided to go with IPZ because of the family type atmosphere he felt from speaking with the agency’s personnel.

“I felt a real connection with IPZ when I started talking to different agencies,” he said this week. “They have connections and people who are going to have your back and make sure you have everything accounted for. I’m proud to have them representing me in my pursuit of playing professional basketball.”

Playing professional basketball has been a goal of Andree’s since he was in fourth grade.

Upon reaching high school, Andree put together an incredible career at CBA, leading the Colts to the NJSIAA South Jersey, Non-Public A Championship during his junior year in 2015.

As a senior in 2016, he was named the Shore Conference Player of the Year.

The collegiate ranks came calling next and Andree’s journey began with a three-year stint on the Lehigh University basketball team.

His freshman year (2016-17) was highlighted when he set a school record with 10 made three-point field goals and a career high 30 points in a 100-67 victory over Saint Francis University of Pennsylvania. The Mountain Hawks went on to play in the Patriot League championship game that season.

The New Jersey sharp-shooter knocked down 42% of his three-pointers during his junior season (2018-19), while averaging a career high 12.9 points per game and leading Lehigh in rebounds.

Leading up to his junior year at Lehigh, Andree knew he was on pace to graduate early with a bachelor’s degree in psychology and he was debating testing the waters as a graduate transfer to another university.

After talking it over with his family, Andree decided the best decision for him was to graduate early from Lehigh and end his college basketball career with a new team during the 2019-20 campaign.

“I felt it was best for me to graduate and try to play somewhere else for my final year of college,” he said. “I enjoyed playing at Lehigh. I wanted a new experience.”

Upon graduating from the school in Bethlehem, Pa., Andree decided to take the leap and to play in one of the best conferences in college basketball: the Atlantic Coast Conference. He joined the North Carolina State University Wolfpack in Raleigh, N.C.

Playing in the same conference against college basketball royalty like Duke University and the University of North Carolina, Andree took full advantage of going up against some of the best talent in the country every day.

“It was a good thing for me to experience playing in a major college basketball conference,” Andree said. “You are going up against the top players in the country every day in practice and in games. It was great to play in front of the biggest fan bases in college basketball. It really helped me to improve my game and get better.”

Andree made a nice impact to begin the 2019-20 season for the Wolfpack. He started four of the first 16 games, averaging 9.7 points per game and pulling down more than five rebounds per contest.

Before sustaining an ankle injury against Clemson on Jan. 18 that sidelined him for six games, Andree was shooting 48% from behind the arc and ranked fourth in the ACC in three-point shooting.

Andree came back to play in the final seven games of the regular season and helped the Wolfpack defeat Pittsburgh, 73-58, in the first round of the ACC Tournament.

The season for N.C. State and Andree’s college career came to a sudden end just before tip-off against Duke on March 12 in the ACC quarterfinals when the remainder of the season was cancelled as the COVID-19 pandemic took hold in the nation.

“It was rough not being able to finish out the season, but I had a great experience playing at North Carolina State,” Andree said.

Andree earned All-ACC academic honors in his only year at N.C. State. The Wolfpack finished the season with a 20-12 record.

Since the end of the campaign, the CBA product has been home in New Jersey. He has been rehabbing his ankle and getting back into training for the next chapter in his life.

It hasn’t been easy training during the pandemic, Andree admits, but that hasn’t stopped him from trying to find a way to keep in shape and get back to mastering his craft.

“It’s tough to find an open gym these days, so I’ve been doing a lot of shooting on my hoop outside my house,” Andree said. “I’ve been trying my best to stay in shape and to stay on top of my game.”

The opportunity to play professional basketball overseas is something the young man is very excited about. He said he expects teams to begin reaching out to him after the situation with the coronavirus settles down and after the NBA draft takes place on June 25.

Until then, Andree is enjoying time with his family and friends and will continue to work as hard as he can to live the dream he has wanted since he was a youngster: to play professional basketball.