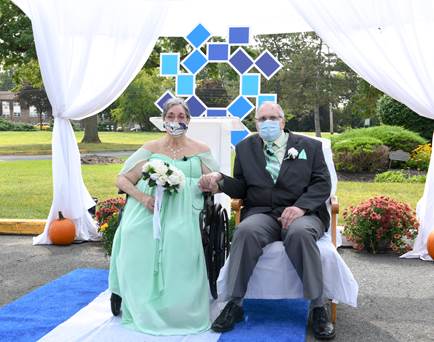 EDISON – Rose Angela Filippi and Paul Reuther, who live at Hackensack Meridian JFK Hartwyck at Edison Estates, never imagined that they would start a romance at the long-term care facility in Edison, fall in love and get married, and certainly not during a global pandemic.

But on Sept. 18, the couple wed at a small ceremony officiated by Edison Mayor Thomas Lankey, who is also senior vice president at Hackensack Meridian JFK Medical Center.

The couple originally planned to wed in June this year but their plans were delayed because of COVID-19.

“When I first saw Paul at the Friendship Club at Hartwyck in October 2019, I thought he looked grumpy. I said to myself, ‘What’s wrong with that man?’ ” said Filippi, age 70, who prefers to be called Angie. “But one of the recreation therapists told me, ‘No, he’s not that way,” and then, over time, I got to know him better, and I found out that he’s warm, giving and loving,” she said of her new husband, who is 68. “He really cares about people.”

Reuther said they started out as friends, but as he got to appreciate her warmth and sense of humor, things began to percolate quickly.

“We started to message back and forth on our computers from our separate rooms after evening card or bingo games,” Filippi said. “Over time, things got serious. One evening I asked Paul over messenger if something was brewing. He said, ‘Yes, and it’s not coffee,’ ” she recalled with a chuckle.

Now, the couple share a room at the extended-stay nursing care facility which offers care to seniors with varying levels of disabilities.

Filippi turned to JFK Hartwyck at Edison Estates for care following a fall two years ago at her home in Edison, which resulted in a complicated broken shoulder bone and a lengthy recuperation. In 2011, Reuther, a widower, began riding a motorcycle, and a crash with a truck resulted in him sustaining compound leg fractures, which required surgery and many months of rehabilitation.

“We came to realize that we have so much in common,” Reuther said. “Angie is Italian and I love Italian food. My background is German and Irish, and she likes German food. We also realized did the same fun things in our past and we like the same music. We were always in synch and we just like being together.”

The couple also share a belief in hard work and both built impressive careers. Filippi, originally from Brooklyn, New York, worked for more than 42 years in various customer service and finance positions at Con Edison, Goldman Sachs, Multiplan Insurance and other companies. Reuther, who grew up in Warren Township, worked hard for many years as a machine operator in numerous plants.

“One of my friends here at JFK Hartwyck tipped me off that Paul was falling for me,” Filippi said modestly. “She said, ‘He just lights up when you enter the room,’ and then I realized she was right, and that I felt the same way.”

On their wedding day, held with just a handful of guests, the bride wore a mint green dress and a tiara, and the green in the groom’s gray and green striped tie matched her outfit to a T.

“We are so happy to have met and to be together now at this time in our lives,” Reuther said.

Filippi commented that the clinical, social work and recreation team at JFK Hartwyck at Edison Estates fully supported their building a relationship and helped them on the path to their engagement, wedding and sharing a room.

“We are just delighted to see two of our residents fall in love and get married,” said Roger P. Rossi, D.O., JFK Johnson Rehabilitation Institute. “Social isolation among older people is an enormous social problem that affects health and well-being, and while people sometimes connect and disconnect in long-term care, it’s fairly uncommon to see a relationship evolve and lead to marriage.”