Murphy is proposing to provide $18.1 billion in pre-Kindergarten through grade 12 school aid funding in Fiscal Year 2022. His proposal is subject to review and approval in the state Legislature.

However, in order to accomplish the goal of fully funding New Jersey’s school funding formula, the formula has been taking state aid away from some school districts and adding state aid to other school districts. The pattern is scheduled to continue for another three years, according to state officials. 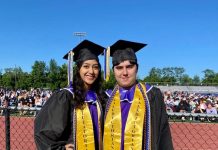