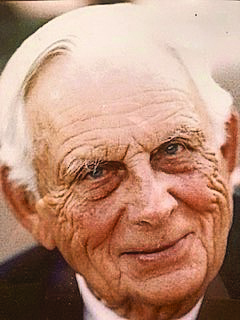 Edward “Ed” Sebastian Frohling, 97, passed away on November 2 in Henderson, NC. Often referred to by family and friends as “larger than life” Ed was the eldest of seven children, he was born in Princeton, NJ on March 26, 1924. Ed attended the Lawrenceville School and graduated from MIT in 1948, earning a degree in metallurgy.

Ed volunteered for and served in the U.S. Army 293rd Engineer Combat Battalion and fought in the European theatre, landing on the shores of Normandy on D-day +6. Toward the end of the conflict in Europe, his squad of 13 men captured ~ 400 German soldiers.

While at MIT, Ed developed the Dutch States Cone, a classifier for mineral processing, still universally used by the industry. He began his career at Climax Molybdenum Company and in 1969 formed Mountain States Mineral Enterprises, moving to Tucson, AZ. During his tenure the company designed and built mineral processing facilities around the world, as well as the first plant in Round Mountain, NV that used the heap leach method, a process for recovering gold from low grade deposits still in use today.

Ed received numerous accolades and awards during his career, including Man of the Year in Tucson (1975), AIME’s Charles F. Rand award (1982), and the distinguished citizen award from the University of Arizona. Ed cofounded the Mining Club of Tucson and helped form the Pima County Community Foundation and the Pima College Foundation. He was a member of Shinnecock Hills Golf Club in Southampton, New York.

A memorial service is scheduled on November 20 at 11 AM at the Springdale Country Club in Princeton, NJ. In lieu of flowers donations may be made to “Four Seasons Hospice” 571 S. Allen Rd Flat Rock, NC 28731.