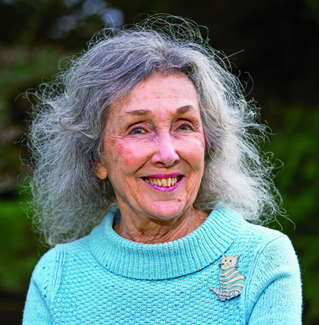 Ruthmarie “Ree” Perry Thomas, 82, of West Windsor passed away Friday, March 4 of injuries sustained in a car accident complicated by her long battle with lung cancer and COPD. She passed peacefully at the Samaritan Center hospice in Mount Holly surrounded by her loving family.

She was born on June 16, 1939 in Princeton, NJ and graduated from Princeton High School in 1957. In high school she sang in choir and loved participating in the musicals. She graduated from Goucher College with a degree in education in 1961 and taught kindergarten in NJ for a year before driving across the country with two friends in a Volkswagen beetle to live in Berkeley, CA. In Berkeley she worked for Goldman’s chain of department stores first as a clerk and then as a buyer. After four years she returned to the East Coast, spent a brief stint in New York and then resided in Princeton as a part of a small minority of female commuters taking the Dinky and NJ Transit into her job at Manufacturers Hanover in Manhattan. It was while commuting she met her husband Roger Thomas, and after marrying in 1971, they settled in West Windsor. After years of serving as soccer, Little League, PTA and band mom extraordinaire while raising her children, she worked in the Hopewell Valley school system at Timberlane for 14 years. Ree loved working there and was in no hurry to retire; given her youthful appearance when she did retire in 2006 her colleagues were surprised to learn she was the oldest employee on staff at the time. In retirement she doted on her grandchildren and returned to her love of singing, joining her daughter in the Westminster Conservatory Community choir.

Ree was warm, kind, compassionate and had exceptional empathy and a great love for animals. She treated all of our friends like family and was a most beloved wife, mom, sister, sister-in-law, grandmother, aunt, cousin, and mother-in-law.

She is survived by her husband of 50 years Roger Thomas, son and daughter-in- law Scott and Megan Thomas, daughter and son-in-law Stephanie Thomas and Matthew Halpin, stepson and daughter-in-law Christopher and Jennifer Thomas, and grandchildren Thomas and Juliette Halpin and Ian Thomas. Also surviving are her brother and sister-in-law Paul and Anna Perry, her sister Alice Strong, and her brother and sister-in-law Mark and Mary Lou Perry.

Visitation for family and friends will be at Kimble Funeral Home at 1 Hamilton Avenue, Princeton, NJ from 1 to 3 pm on March 20, with a service directly following. A livestream link will be available. She will join her parents Ruth and Paul Perry to rest at the Princeton Cemetery in a private burial.

In lieu of flowers, donations may be sent to the American Cancer Society.