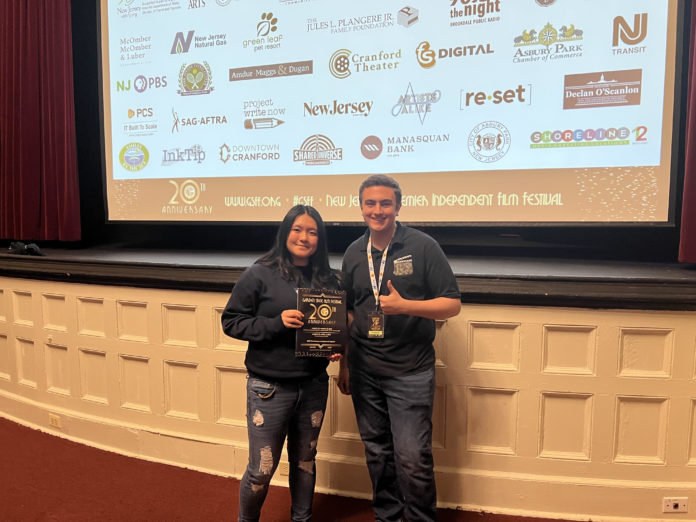 METUCHEN – Domestic violence is all too real.

Michelle Tang, a senior at Metuchen High School, took on the serious topic in her short film “Hunter,” which garnered a Home Grown Drama Short award from the Garden State Film Festival held from March 23-27 in Asbury Park.

“I was super impressed by all the films that I watched, so the award certainly came as a surprise,” she said. “I was honored and excited. But, I have learned not to fixate on awards whether I win at a festival or don’t even make it in. I recalled losing against films at certain film festivals and winning against them at others in my prior festival run. In the end, I focus on improvement with each film I make and the development of new skills and techniques along the way. At festivals, most filmmakers are excited to meet other artists and see what others are making rather than worrying about winning. It’s a very stress-free and collaborative environment.”

“Hunter,” written and directed by Michelle and produced by Microlite Films, is about a young boy who makes an attempt to save his mom from his abusive father.

“At its core, the film is about the different roles that family members play in an abusive family and how they affect the malleable mind of a child,” Michelle said.

In her director statement to the film festival, Michelle said she often wonders “how does a child’s environment affect their mental state and development?” She enjoyed exploring the concept within her film.

“[My film] was first inspired by a friend who was trapped in a home of domestic violence,” she said. “She loved her parents and did not want to leave them, so she never tried to get out. I felt bad for her, but never understood just how scary domestic violence could be until I witnessed a situation myself. I froze. For weeks, I felt guilty for not acting. The fear and uncertainty that I experienced in that moment allowed me to get a glimpse into what my friend’s life was like. Her strength inspired me to explore such a family dynamic in my film.”

Michelle further said the plot of “Hunter” was also sparked by a moral ambiguity she came across in a few news articles.

“Though the cases looked fairly similar, the court rulings varied, but they all stirred an uproar,” she said. “The conflicting views piqued my interest.”

While the main plot came to mind pretty quickly, aspects of the dialogue, character description and ending took a bit longer to develop, Michelle said.

Through “Hunter,” she aimed to explore the links between different roles in a toxic family and how they affect a child; the abusive father plagued with addiction issues; the emotionally exhausted and neglectful mother; and the overwhelmed brother who acts as the glue of the family.

The pre-production process of the film took two to three months, filming took three days and editing took approximately one to two months.

“This was the first time that I casted actors for my film,” she said. “I first picked out the talents that stood out to me through video audition tapes. Then, I met with them over Zoom to make sure that I worked well with them and that they took direction well. I was nervous to cast actors at first, but I ended up with an amazing cast.”

The first person casted was Hanna Gaffney as the mother; then Reid Richards, a 10-year-old actor, was casted as the lead Hunter. Michelle said Gaffney nailed the role in her self-tape and Reid wowed everyone in his audition.

“Finally, we had some difficulty finding actors for Tate, the older brother, and Brian, the dad, but I ended up casting Cameron [Pillitteri] for Tate, who wowed us with his portrayal of the emotional ending scene, and James [Rappa] for Brian, who had an impressive initial tape and took direction well,” she said. “On set, all the actors worked together and put their skills into action, and I sure learned a lot from them. My friend Ben [Solasky], a high schooler and video producer, did an amazing job operating the camera and lighting scenes for Hunter. And my longtime friend and supporter, Rose Notch, operated the boom mic [operation]. We had a small crew, so everyone was constantly moving and helping out.”

The film was filmed at Michelle’s house in Metuchen and in a forest near her house.

“It was the most convenient location for us to shoot,” she said.

Michelle has been submitting her films to different festivals since she was in eighth grade. This is the second film she has submitted to the Garden State Film Festival. Her first film titled “Runaway” followed a young girl who plans to run away from her fighting parents.

“My friends and I made ‘Runaway’ our freshman year of high school and it was instrumental in helping realize my love for filmmaking,” she said. “A lot of my other films were smaller projects during quarantine for 48 [to] 72-hour challenges, where I was operating the camera, directing, writing and acting all at the same time. I decided to submit those films to fewer festivals as the quality wasn’t the best and festival fees can pile up, but those films did screen at a few festivals.”

Michelle submits her films through the FilmFreeway platform.

“I always look for festivals that are in New Jersey and/or cater to youth filmmakers,” she said. “The Garden State Film Festival allows young filmmakers to socialize with other students and learn from the older filmmakers by attending other screenings and parties. It’s an awesome film festival with great venues, so I knew I wanted to submit and attend.”

The Garden State Film Festival debuts more than 200 independent films annually over four days each spring. The festival, which celebrated its 20th anniversary this year, was founded in 2002 in a Sea Girt grocery story by film industry veteran Diane Raver and Hollywood actor Robert Pastorelli, according to its website.

The artistic philosophy of the festival is rooted in the celebration of the independent film genre and the creation of a forum where local and other independent filmmakers can exhibit their work. It was also created to pay tribute to New Jersey’s legacy as the birthplace of the American filmmaking industry in Thomas Edison Menlo Park laboratories where he invented the first film cameras and projectors, to Fort Lee, where the original studios were founded.