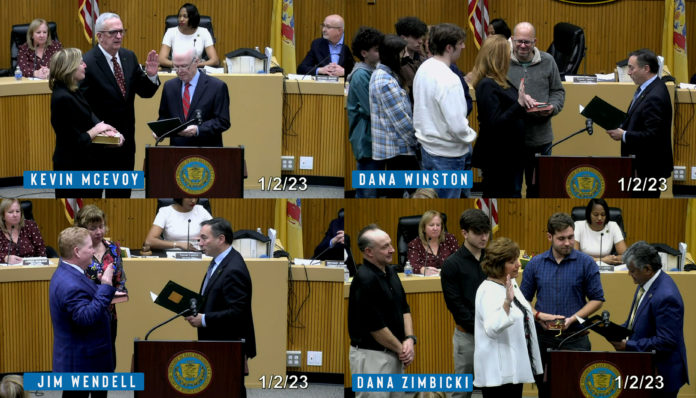 EAST BRUNSWICK – The East Brunswick Township Council started the new year with a packed reorganization meeting to establish the foundation for 2023.

The gathering on Jan. 2 began with the instating of elected council members and nominating Kevin McEvoy and Dana Zimbicki for president and vice president of the council. The meeting also honored former Councilwoman Sharon Sullivan for her tenure of service on the township council. 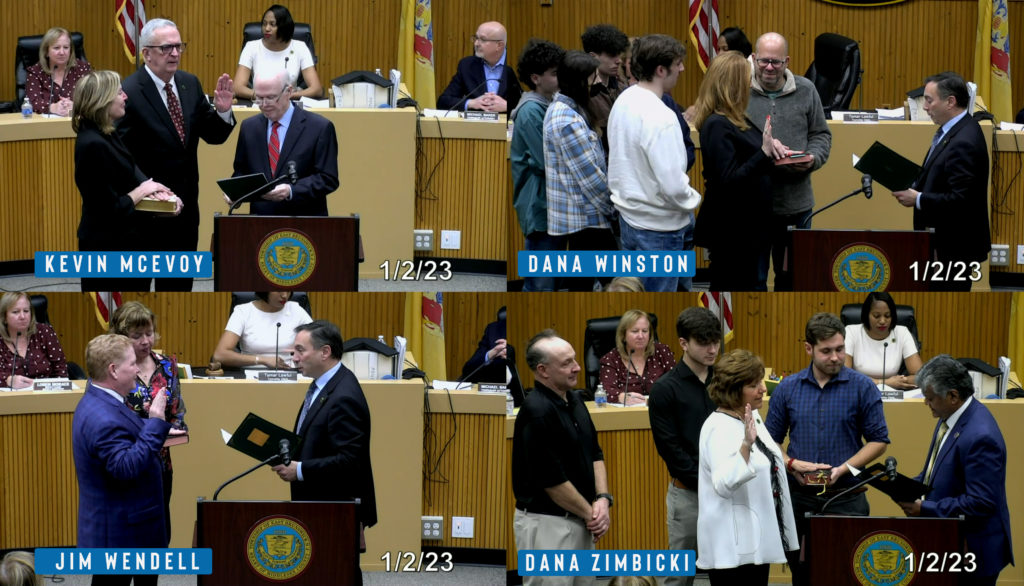 Following the oaths of office, McEvoy and Zimbicki were both unanimously nominated to serve as Council president and vice president.

In Zimbicki’s nomination of McEvoy, she defined his servitude as exemplary for his involvement in the township as a former mayor, a distinguished educator, and as a public official. She stated that McEvoy’s widespread presence and track record of commitment to East Brunswick qualified him as the ideal candidate for Council president.

“I’ve had the pleasure of knowing Kevin since 1989, when we both worked together in the social studies department at the East Brunswick Public Schools. Mr. McEvoy is known by many different titles. He’s known as ‘Mac,’ ‘Coach,’ ‘Voice of the Bears,’ ‘Teacher,’ ‘Mayor’ and ‘Township Leader.’ 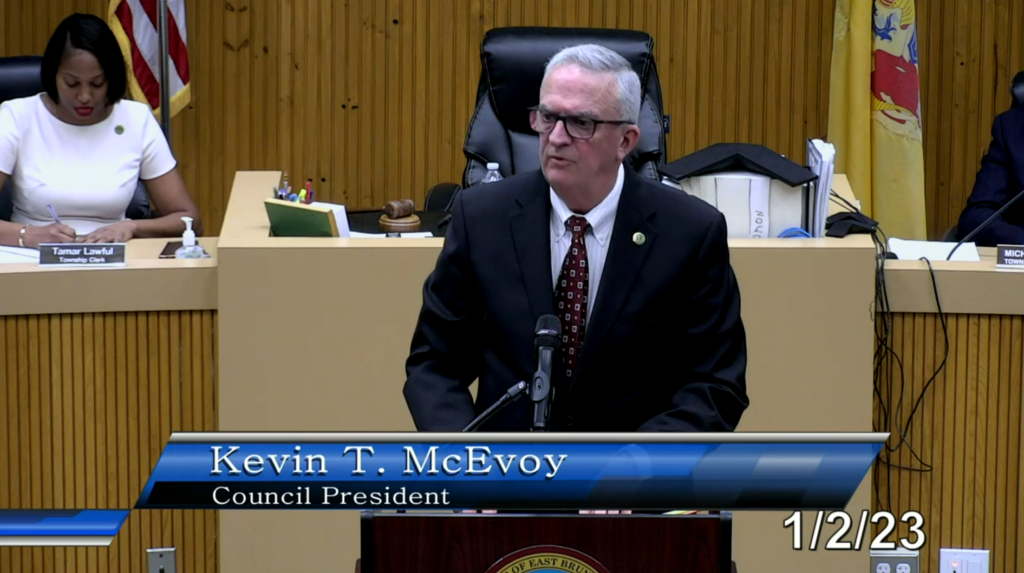 “He’s left an indelible mark on our town in a plethora of ways. Anyone who knows Kevin knows how important the well-being of East Brunswick is to him and how seriously he takes his position as township councilman.

“Kevin’s characteristics of being an active and proactive listener, being inquisitive, implementing decisions with care, a trusted public servant, and a passionate and active citizen of our community, makes him the perfect candidate for president of the East Brunswick Council,” Zimbicki said.

Councilwoman Dana Winston shared her nomination for Zimbicki, stating that she “embodied” the characteristics of a community leader. 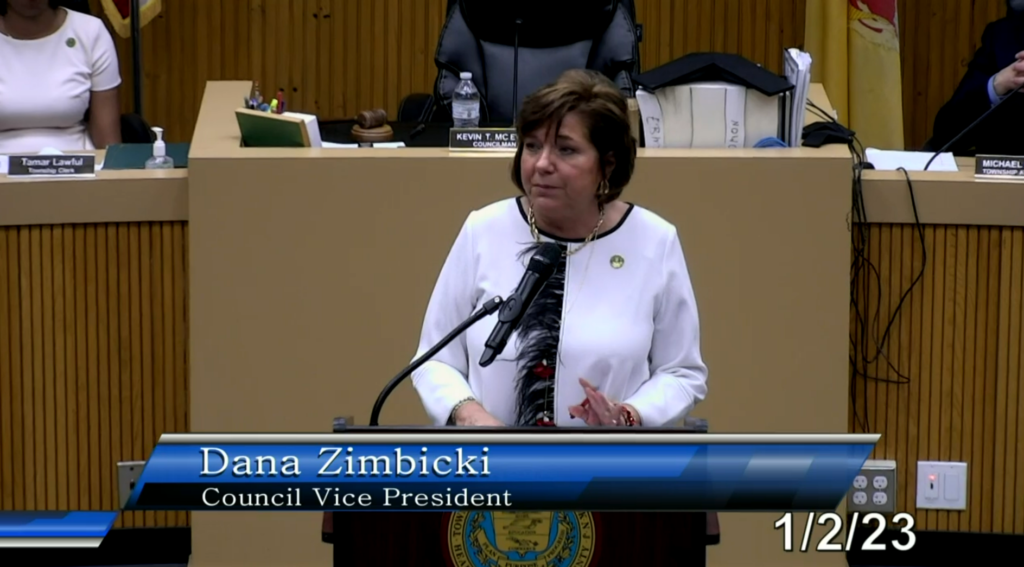 “She’s 100 percent in all that she does. Her passion and incredible organization skills make her the perfect candidate for Council vice president. Her years of service to our community are exemplary and it is my honor to nominate her for the position,” Winston said.

In 2022, Zimbicki was appointed to fill the vacant seat of former councilman Michael Spadafino. Prior to her appointment, Zimbicki had not held public office. However, she has served as the president of the East Brunswick Education Association and has been actively involved in various community events and volunteer efforts throughout the township.

After the nominations were finalized, McEvoy and other council members addressed those in attendance. They each shared a few statements that reaffirmed the public of their sworn commitment to create a better East Brunswick.

“Every one of use is in a position of responsibility. In the final analysis, the kind of government we get depends on how we fulfill those responsibilities. Responsibilities that reward courage, respect honor, cherish behaviors, and recognize the righteousness of the cause.

“So for us, the future is full of uncertainties. Yet, the challenges and the work needed for good governance, well, we are prepared and we will prove that to you with our devotion and actions,” McEvoy said.

Following the council’s comments, Sullivan was honored for her four-year tenure. Sullivan did not seek re-election for a new term in the November general election. Her decision was prompted by several life events that she said would affect her commitment to the role.

“At the beginning of this year, I made my choice not to run for council again. Matt (Sullivan’s son) was getting married in September [and] my mom was in her last stage of Alzheimer’s. I knew if I couldn’t give 100 percent to the campaign, serve as a council person, help out and assist with my mom, and assist with the wedding plans, something had to give,” Sullivan said.

“I promised the East Brunswick residents during my swearing in speech, that for the next 1,461 days I would do my best for all of East Brunswick. I believe I met that goal,” she said. 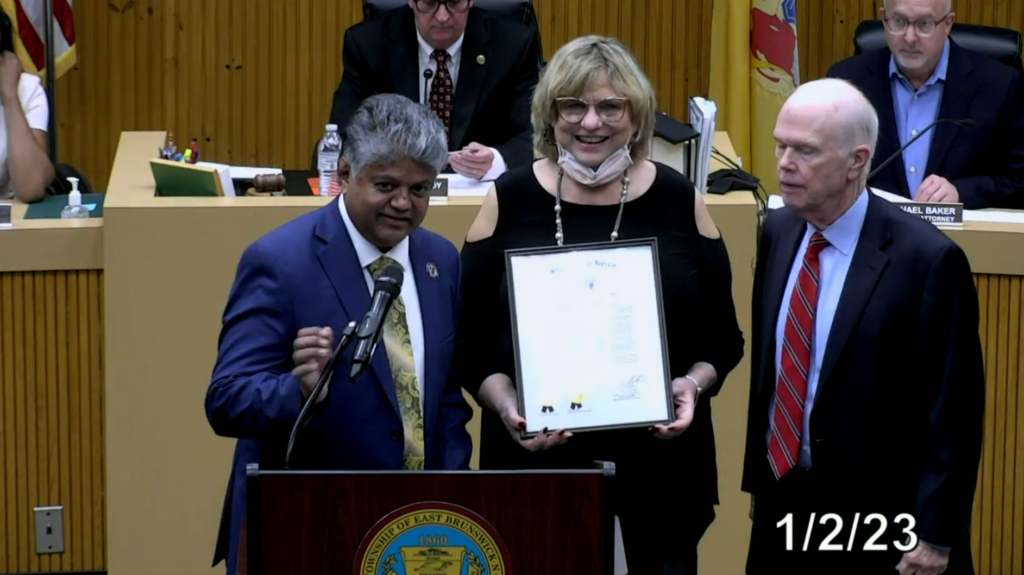 Zimbicki, Stanley, and Diegnan all honored Sullivan with a resolution and an honorary plague.

The resolution stated, “During her term in elected office, Councilwoman Sullivan continually sought to improve the quality of life for Township residents and expertly demonstrated foresight, leadership, and fiscal responsibility in policy decisions and operations of the Township’s government …