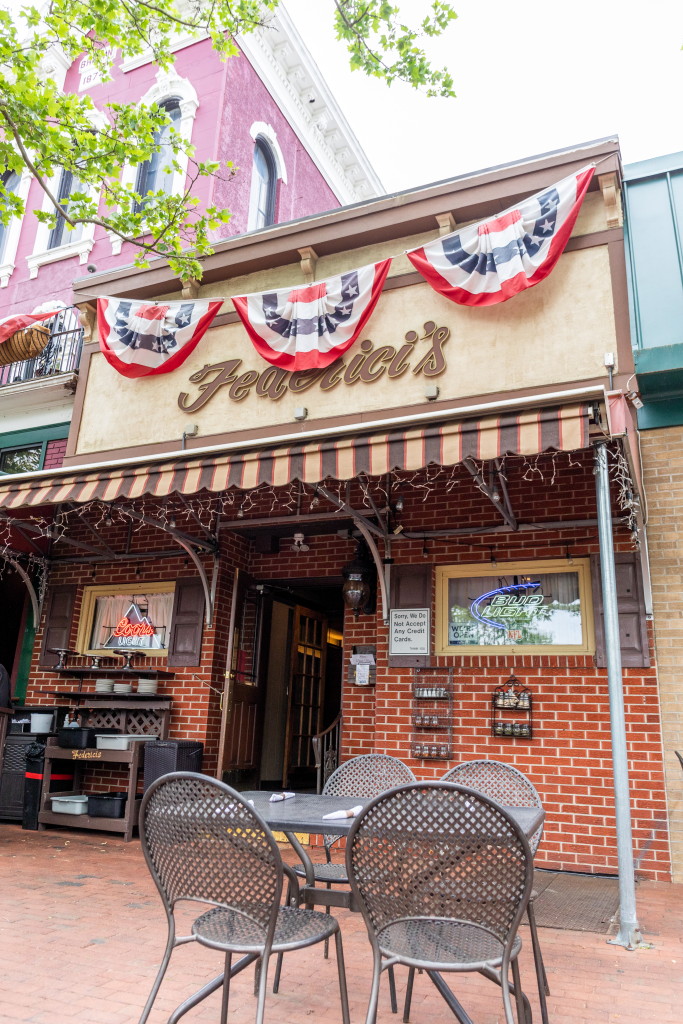 FREEHOLD – An iconic restaurant in Freehold Borough’s downtown district is continuing to serve the community as it celebrates its centennial anniversary.

July 1 marked the 100-year anniversary of Federici’s Family Restaurant, which has operated from its East Main Street location since 1921.

Since its inception, the restaurant has been owned by the Federici family. The current owners are brothers Michael, David and John Federici, and their mother Patricia.

Michael, David and John are the grandsons of the original owner, Frank Federici.

The Federici family celebrated the milestone on June 30 with a special event held in the Market Yard parking lot behind the restaurant. The entire community was invited to mark the special occasion.

“On behalf of the entire governing body and the residents of Freehold Borough, we want to present this proclamation declaring July 1, 2021, as Federici’s Family Restaurant Day,” Kane said.

“I extend all good wishes from the Freehold community to the Federici family and encourage all citizens to support this beloved institution by visiting and dining at the restaurant during its centennial year,” he said.

The building that eventually became Federici’s was constructed in 1853 as the Wolcott Hotel. The building was purchased by Frank and Esther Federici in 1921 for $23,001.

“My grandparents bought the Wolcott Hotel at this exact location,” Mike Federici said. “There were 14 rooms on the second to third floor and a small restaurant on the first floor. That is where it all started.

“Over 100 years of business there were some key decisions made to make Federici’s what it is today. In 1933, we were issued a liquor license.

“Spat, Esther and Dante experimented for three months and came up with the recipe we still use today. What a recipe,” Federici said.

By 1949, the building was known as Frank’s Hotel, while the restaurant portion was called Frank’s Grill Room.

In 1951, the hotel portion was destroyed in a fire. The business subsequently became Frank’s Bar and Grill the same year. The grill was a restaurant specializing in pizza.

In 1959, Frank Federici and Sons Inc. was formed, leading to the restaurant adopting its current name of Federici’s.

The ownership of Federici’s was assumed entirely by Spat Federici and his wife, Patricia, in 1983 following the deaths of Frank, Esther and Dante.

A fourth generation of the family has since joined the operation.

“I am so proud we can say the same family has owned and operated this business for 100 years,” Patricia Federici said. “As a family member who has had the honor of working with all four generations, I count my blessings to have helped set a legacy.

“We have customers who have been coming to our restaurant their entire life, bringing children, grandchildren, great-grandchildren, family and friends. I want to thank them for being such loyal patrons.

“It is so heartwarming and there are no words to put these feelings of gratitude toward our faithful customers, dedicated employees and to the family. Especially to Mom and Pop Federici (Frank and Esther), who started us off 100 years ago; my husband, Spat, his brother, Dante, and my sons who have continued the tradition,” she said.

Michael, David and John Federici began working for the restaurant during the 1980s.

“In 1981, we opened a bigger kitchen, which allowed us to expand our menu to where it is today,” Michael Federici said. “In 1984, creamy Italian was introduced to our menu by a gentleman named Ted Perry. What another great recipe. My grandparents, my father and my uncle, who started and built this business, would be so proud of what has been accomplished.”

Spat Federici died in 2009 and Patricia and her sons have run Federici’s since then.

Following a fire in 2018, the restaurant’s bar was remodeled and named the Spat Federici Bar Room.

“All businesses face challenges,” Michael Federici said. “We survived the Great Depression, two fires, several wars and now the coronavirus pandemic and many other challenges, but our focus has always been bringing our delicious food to our customers and our community. Today, the Federicis would like to thank the community for their support to our family and staff for the last 100 years.”