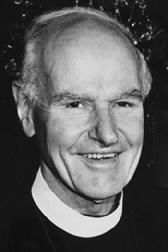 James R Whittemore, 90 The Rev. James Robinson Whittemore (Jim) of OceanView at Falmouth, Maine, died December 30, 2015. Jim served as Rector of Trinity Church, Princeton, 1967-1977. During his leadership, Trinity Church, Princeton, evolved into a regional church with expanded lay leadership and programs, a magnificent Men and Boys Choir– under the musical direction of James Litton, liturgical renewal, a remodeled church, enlarged facilities, and a more diverse and welcoming congregation. Jim was born in Detroit, MI, on Jan. 13, 1925, to the late Helen Crawford Whittemore and The Rt. Rev. Lewis Bliss Whittemore. With ancestral ties to Martha’s Vineyard, MA, the Whittemore family spent summers there, where Jim’s great love of sailing began and flourished. A graduate of Cranbrook Schools in Bloomfield Hills, MI, Jim entered Yale University in 1942 as the campus began mobilizing its students for WWII. Jim became a deck officer aboard a LST in the Western Pacific, returning to Yale to graduate with the class of 1945W, the “war class.” Following the path of his father, Jim graduated from The Episcopal Divinity School, ’51, and later, was a Harvard University Merrill Fellow. He holds the degrees of Master of Sacred Theology and Dr. of Ministry from NY Theological Seminary. From 1994 to 2004, Jim served on the Board of Trustees at the Episcopal Divinity School. Jim’s passions included his family, his faith and ministries, his parishioners and friends, his broad view of ecumenism, and his interest in the global maritime community. But always, there was his love of the sea and sailing. Jim was a member of the New York Yacht Club, The Cruising Club of America, and the Royal Ocean Racing Club, London. Serving Episcopal parishes in Sault Ste. Marie, MI; Hamilton, MA; and Princeton, NJ, Jim spent the next 15 years, 1977-1992, as executive director of Seamen’s Church Institute NY and NJ (SCI), a social service agency dedicated to addressing the needs of seafarers, worldwide. While at SCI, Jim served a term as chairman of the International Christian Maritime Association, visiting foreign seafaring centers around the world with his wife Mary B. Jim has remained on the SCI Board of Trustees as an honorary member. In 1994, Jim and Mary B moved to Castine, ME, where Jim spent his remaining active ministry as vicar of Trinity Episcopal Church. Lest his sailing interests be neglected, he served as chair of the Castine Harbor Committee while continuing to sail aboard the Mary B, cruising Penobscot Bay with visiting children, grandchildren and friends. Jim is survived by his loving wife of 33 years, Mary Bolling; his sisters: Virginia Packer (of Winnetca, IL), and Nancy Wissemann (of Longmeadow, MA); his children: Lucy Whittemore Heywood (and Bart) of Martha’s Vineyard, MA; Bob Whittemore (and Anne) of Mt. Pleasant, SC; his 3 step-children, Bo Rice (and Maryann) of Lutherville, MD, Carl Rice (and Molly) of Pennington, NJ, and Molly Goyette(and Gordon) of Amherst NH; and his 10 grandchildren: Emma and Alex Whittemore; Nelson, Charles, and Robert Rice; Gilly, DJ, and Carly Rice; Andrew and Anna Goyette. A memorial service will be held in Castine, ME, in June, date to be determined. In lieu of flowers, contributions may be sent to Trinity Episcopal Church, P.O. Box 433, Castine, ME, 04421 or to The Episcopal Church of St. Mary, 43 Foreside Rd, Falmouth, ME, 04105. Arrangements by Hobbs Funeral Home, 230 Cottage Road, South Portland, ME, (207) 799-4472.