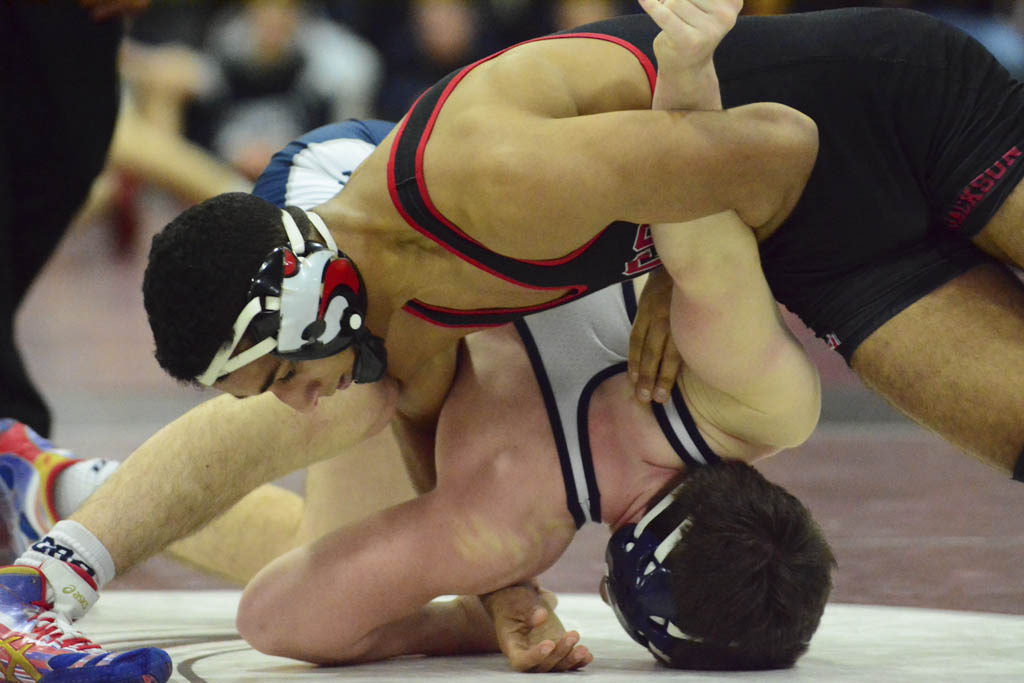 CBA lost a heartbreaker to state rival St. Augustine Preparatory School in the Non-Public South A finals. Dylan VanSickell (132 pounds) and Sebastian Rivera (113) came through with pins for the Colts, while Richie Koehler (120) posted a major decision over St. Augustine’s Brett Bodnar in the penultimate bout. But St. Augustine clinched the victory when Steven Schwab pinned Sam LaCorte (126) of CBA.

The Colts, who won their first Shore Conference Tournament championship this season, will be loaded with talent at the District 22 tournament and could advance multiple wrestlers to Region 6. Koehler, a sophomore, is a top grappler at 120 pounds. VanSickell, whose win against St. Augustine was the 100th of his career, and junior Nick Schutzenhofer (106) are among the best in their weight classes. Seniors Rivera (113), Jack LaCorte (195), Will Oxley (220) and Carl Vasti (138) are also wrestlers to watch.

CBA took the team title at the 2015 District 22 tournament, finishing ahead of Long Branch.

Despite its youth, Raritan will also bring several contenders to districts. Raritan’s A.J. Erven, a sophomore, should be in the mix at 120 pounds along with Dave Tieto of Ocean Township High School and CBA’s Koehler. Standout freshman Charles Barrale, a 20-bout winner on the season, will be one of the favorites at 160 pounds alongside Schutzenhofer and Keyport High School’s Alex Erven.

Sophomore Russell Benson, another young grappler from the Rockets, has had a great season, surpassing the 25-win mark. Benson and Red Bank Catholic High School’s Ethan Byrne, who holds a 24-3 record, will be players for the 126-pound title. Raritan freshman Anthony Aquilano is someone to watch at 138 pounds.

Rivera and Middletown North’s Sean Deering are among the best bets to win gold at 113 pounds.

The battle will be heated among 132-pounders, including VanSickell, Ocean Township’s Jake Benner, Long Branch’s T.J. Conlon and Raritan’s Jimmy Vanfecthmann. Also from the Green Wave, Lamont Reid will be going up against Middletown North’s Thomas Anderson and Raritan’s Nick Bohal at 160 pounds.

A clash of crosstown rivals could be brewing at 170 pounds. Middletown High School South senior Brendan Rumsby and Middletown North junior Brian Winz are eyeing the top seed. Keansburg High School freshman George Burdick is another contender for a medal.

The 182-pound bracket is stacked. Seniors Anthony Vetrano of Middletown North and T.J. Saldutti of Ocean Township are possibly the best in all of Region 6 in their weight class. Rumson-Fair Haven Regional High School’s Theo Addison is also a strong candidate vying for a medal.

One more challenger from Middletown North is senior Chad Freshnock, a 220-pounder who is undefeated this season at 20-0. CBA’s Oxley, Long Branch’s Joey Jasio and Keansburg’s Dan Baumann — all seniors — should make the competition at 220 pounds fierce.

The District 22 tournament, which runs Feb. 19-20 at Red Bank Regional High School, marks the beginning of the road to Atlantic City. The individual winners advance to the Region 6 tournament with the second- and third-place finishers. At the Region 6 tournament, the best of the Shore Conference will battle for tickets to the NJSIAA individual championships at Atlantic City’s Boardwalk Hall.