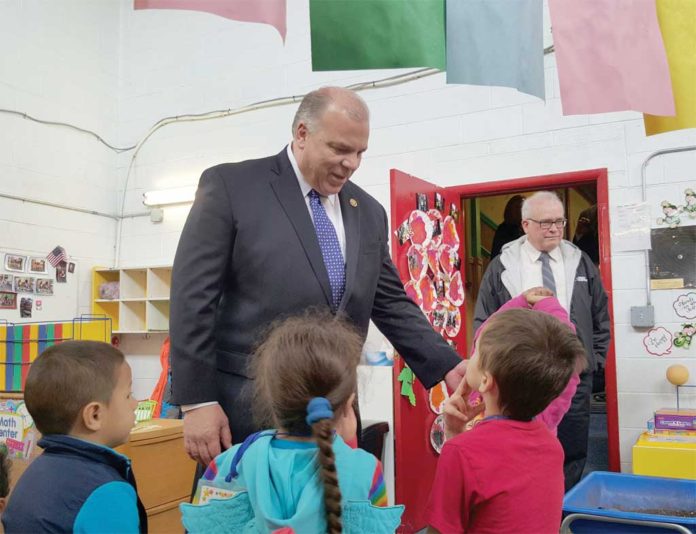 SOUTH AMBOY —  State officials believe that focusing on educating students at an early age will result in a brighter future for New Jersey.

“We kind of fell off the tracks,” Senate President Stephen Sweeney (D-Gloucester) said during a visit with Sen. Joe Vitale (D-Middlesex) to the Children’s Center for Learning on Broadway in South Amboy on April 11.

The results of positive development of social and emotional skills and structure at a young age are the main reasons for a push on the state level to invest in full-day pre-kindergarten programs, officials said.

“We decided that New Jersey is still struggling, and the only way to get New Jersey back, is to invest in its people, and we came up with a program called ‘New Jersey Investing In You,’ and one of the most critical components of it is pre-K,” Sweeney said.

The senate president said through research, they saw how well a pre-K program works.

“We have 85 percent of our school districts that have full-day kindergarten,” he said. “We have to start to find a way to start funding education early on. [The U.S. Department of Education] says every dollar you spend in pre-K you save $7 later on [in taxpayer money], and when you see those beautiful children you see the work they are doing and when you put two drawings together with one child that has been through preschool and one child that hasn’t … it only tells you [that this is needed].”

South Amboy Mayor Fred Henry, school officials, teachers and education advocates learned about the benefits of a preschool education to children and the need for an expansion of New Jersey’s high-quality programs to additional school districts.

“Research shows that quality early childhood education is one of the greatest investments we can make in our children,” Vitale said. “We already have a model program operating in the state’s former Abbott Districts, but we have to do more to provide all of our children with the foundation they need to be successful.”

Senate Democrats are championing legislation, sponsored by Sen. Teresa Ruiz (D-Essex), to expand full-day preschool to additional districts in the state, with priority going to those with the highest concentration of at-risk pupils.

The proposed bill, S-997, makes supplemental appropriation of $103 million from the  Property Tax Relief Fund to the state Department of Education to provide preschool expansion aid to certain school districts.

Vitale said the bill is in a form of a budget resolution for the funding. He said this month they are currently in the budget cycle and before the budget is presented to Gov. Chris Christie for approval in June, they will make the needed additions and subtractions to the bill.

Cynthia Rice, an attorney and senior policy analyst on Advocates for Children of New Jersey’s (ACNJ) early childhood team, said the problem right now is access to a preschool program for every child.

“Not every child has access,” she said, adding that whether it is a program in a public or private setting, what matters is it is a high-quality program with high standards.

Lisa Barbarino, who owns the Children’s Center for Learning in South Amboy, which has children 6 weeks old to 6 years old attending the school, said along with supporting a full-day preschool program, it is important to support the staff of these programs.

“Children in these programs learn that not everything is theirs, they learn structure, they learn to eat sitting at a table, and they learn social and emotional skills,” she said, adding that it is important to note that a full-day preschool program is not a babysitting program.

Mary Jane DiPaolo, of Community Child Care Solutions, said they are in favor of the expansion of pre-kindergarten and said it is important for parents to have choices for their children on what programs they send their children to.

Sam Crane, of Pre-K Our Way, said they are bringing their support of the bill to communities around the state. Pre-K Our Way is a nonpartisan and nonprofit community-based organization, coordinated through a diverse group, that engages communities on expanding high-quality preschool for their children.

“Children who have access to high-quality pre-K programs enter kindergarten prepared for school,” he said. “The legislation would begin a process to fully implement the 2008 law which called for expanding New Jersey’s high-quality 3- and 4-year-old preschool program to 102 other districts across the state. This will allow more children to benefit from the state’s preschool program and to begin school ready for success.”