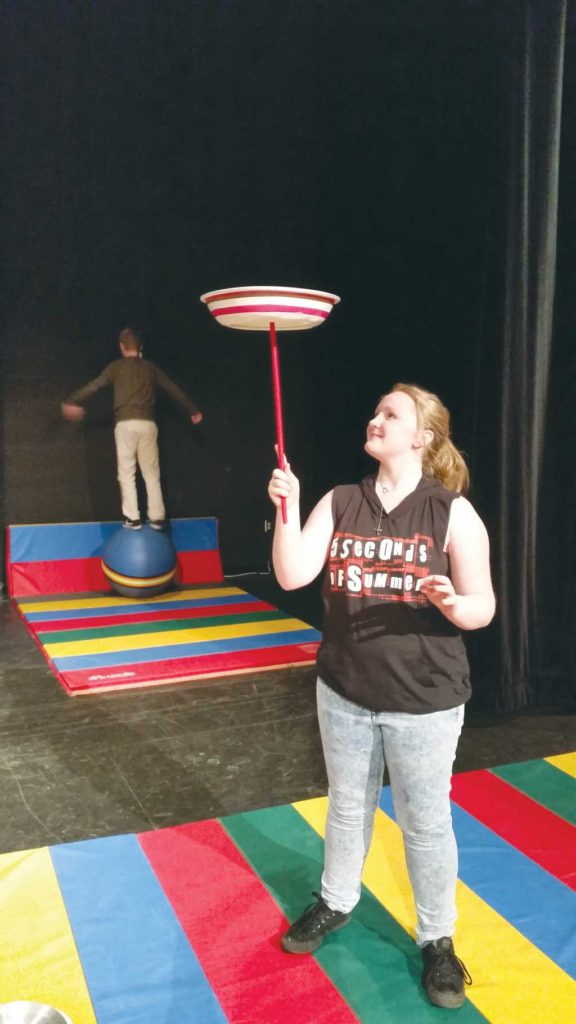 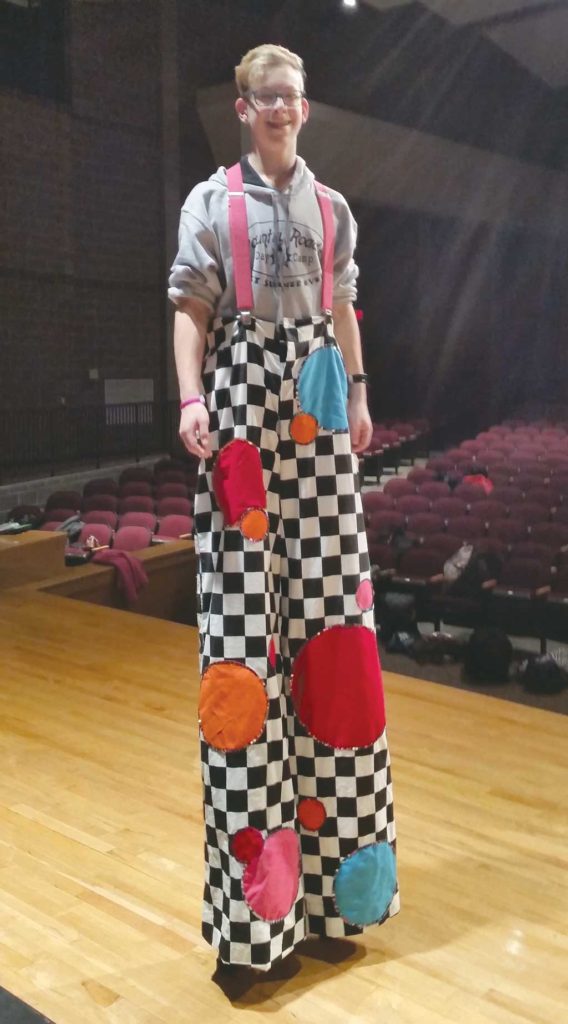 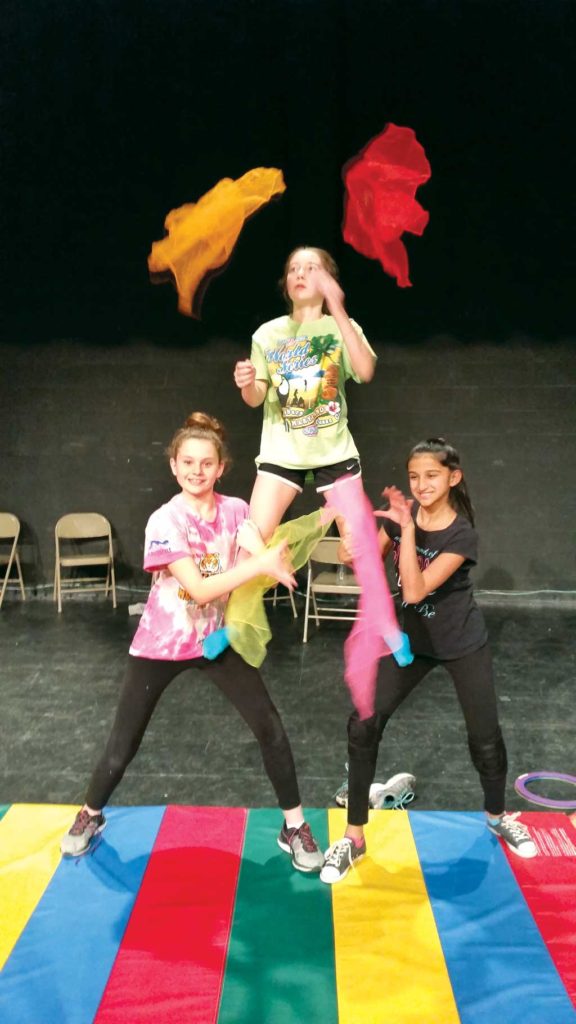 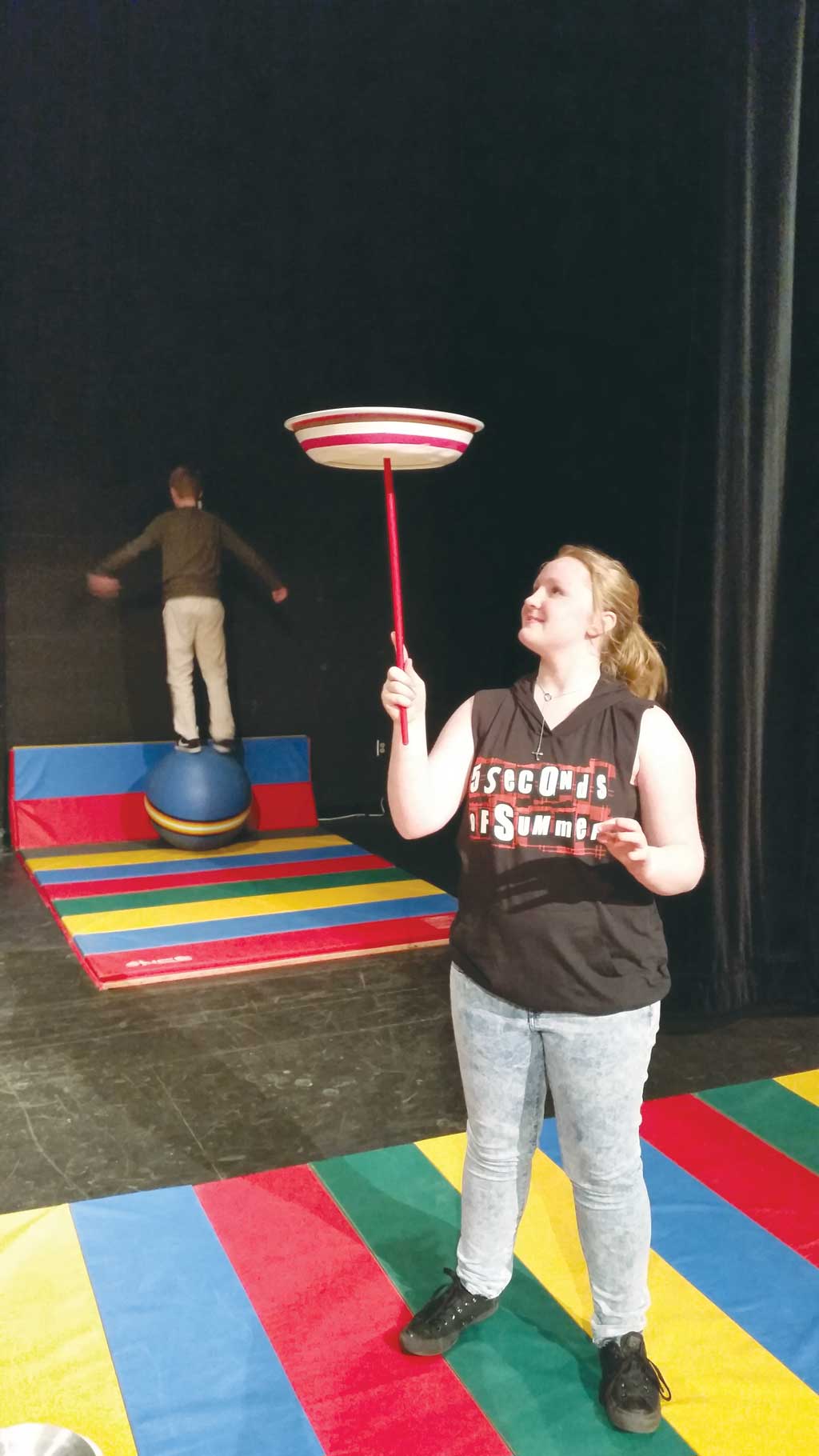 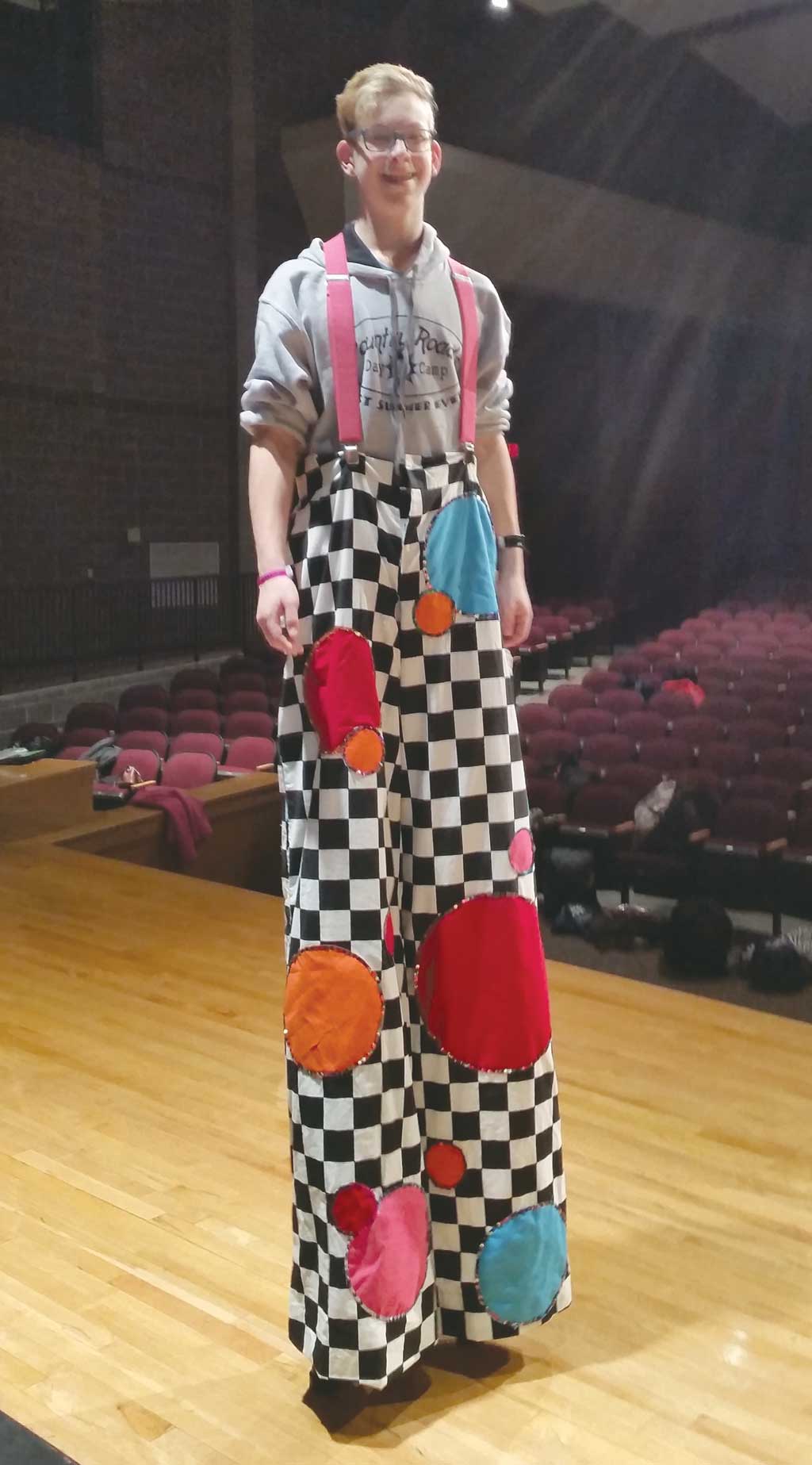 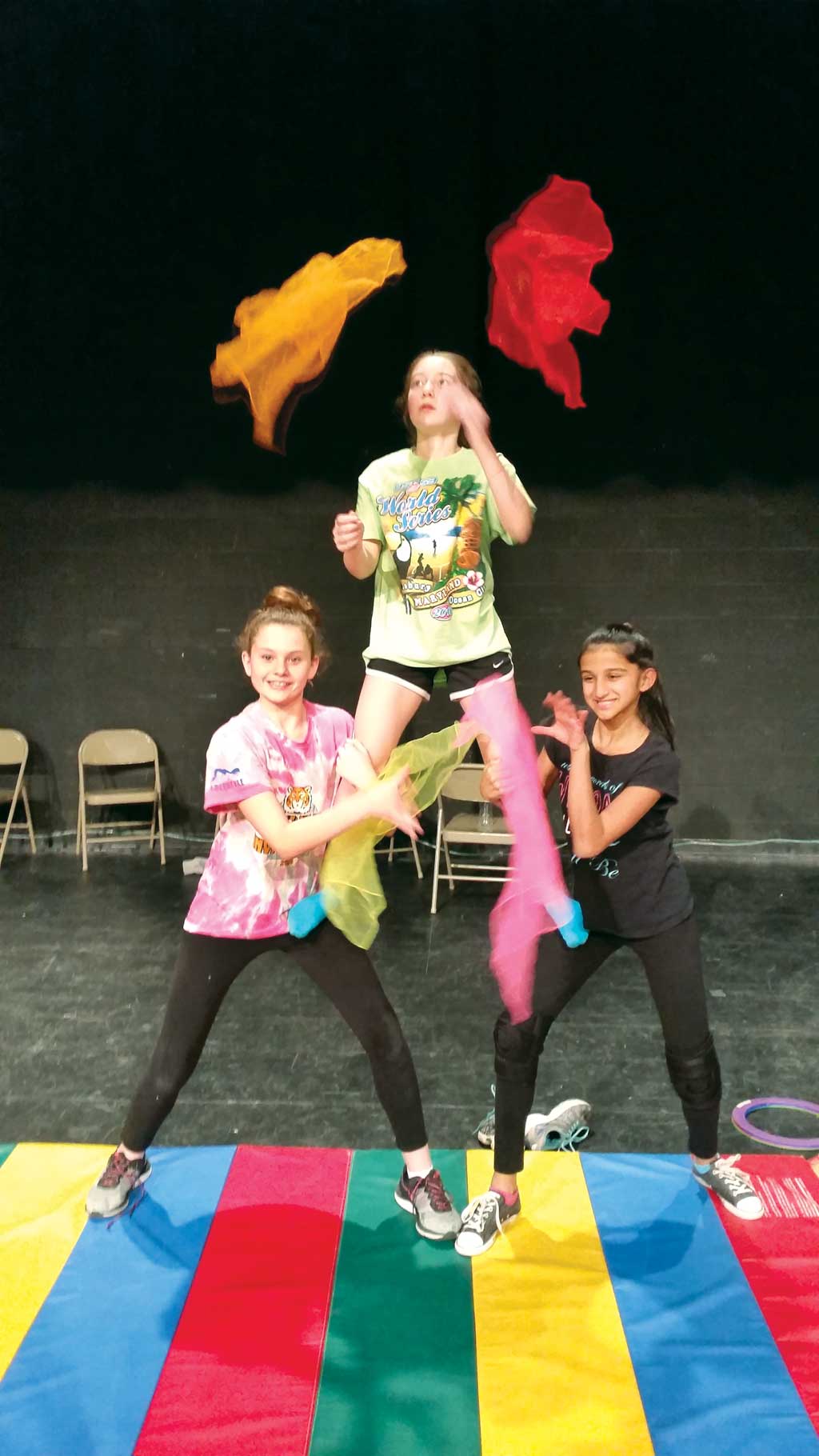 MILLSTONE – The Millstone Township Middle School is preparing to host a production of the musical “Barnum.”

“Barnum,” which is based on the life of showman P.T. Barnum (1810-91), will be performed by middle school pupils at the Millstone Performing Arts Center, Dawson Court, at 7 p.m. March 4-5.

“Barnum” will feature a cast of 60 pupils in grades six, seven and eight. The show combines traditional musical theater with circus performance. The cast includes tumblers, jugglers, clowns and acrobats.

“This cast comes up with creative ideas,” director Lisamarie Cappuzzo said. “It is great to have that energy and that thought process.”

Eighth-grader Mike Ragosa will play the title role and views Barnum as having childlike and adult qualities.

“He’s a mix of a kid and an adult,” the young man said. “He likes to imagine a lot of things, but he also has adult duties in running his show. He’s very colorful and likes to see himself and other people happy.”

To prepare for the role, Mike said, he observed older people in his life to understand the mannerisms of an adult character and he said he got in touch with his inner child to convey Barnum’s personality.

The young man is no stranger to theater, having been performing in plays since he attended summer camp in the first grade. He enjoys seeing the audiences who attend theater productions and hearing the audience members talk about the show afterward.

“We get all of our family members and all of our friends to see the shows,” he said. “And every year they keep getting better and better.”

Mike’s views about Barnum are shared by eighth-grader Natalie Ligotino, who portrays the great showman’s wife, Chairy. Natalie sees Chairy as a foil to Barnum, a mature character less interested in spectacle.

“She is the complete opposite of Barnum, she’s very laid back,” Natalie said. “She encourages him to follow his dreams, but she keeps him grounded.”

In keeping with her character’s personality, Natalie said she acts prim and proper while playing Chairy, always maintaining proper posture and keeping her head up straight.

This is Natalie’s second play, having previously appeared in the middle school’s 2015 production of “High School Musical.”

“The shows here always turn out fantastic,” Natalie said. “The choreography is great, the numbers are great. This is going to be one of the best shows the school has ever done.”

The play features many people who were involved with Barnum’s shows. In the role of opera singer Jenny Lind is eighth-grader Sara Zerilli.

“She is very serious about what she does on-stage, but off-stage, she’s very playful and doesn’t have a care,” Sara said. “Everything is a game to her.”

Sara said she enjoys playing Lind because she can relate to her. Having been a singer for eight years and having sung opera for four years, the young woman said she finds Jenny to be similar in her musical pursuits and her personality. As with Jenny, Sara sees herself as serious on-stage, but fun off-stage.

Eighth-grader Joseph Pallante, who plays circus ringmaster and Barnum’s partner James A. Bailey, feels a connection with his character.

Joseph, who has been involved in theater for five years, considers himself and Bailey to be happy and energetic individuals, which he noted is also the personality of many people who work in circuses. He said Doug Young, a circus performer at the New Jersey Circus Center, Marlboro, is helping the “Barnum” cast members learn skills, stunts and tricks they will perform in the show.

Joseph said he is excited to be taking on his first prominent role, a feeling shared by eighth-grader Michelle Sonbati, who portrays Joyce Heth, an elderly woman Barnum presents as the oldest woman in the world.

Michelle appeared in the middle school’s productions of “High School Musical” and “Oliver!” but this is her first non-ensemble performance.

To prepare for the role of an elderly woman, Michelle said she practiced hunching over while she was walking and sitting, and she created a shaky, aged voice for the character.

“Joyce Heth is very sassy and funny,” Michelle said. “She’s entertaining in her one big scene.”

Also playing a member of Barnum’s troupe is sixth-grader Jacob Normand, who portrays Tom Thumb. According to Jacob, Tom sees his short stature as a gift.

“He’s a warm character,” Jacob said. “He likes to be funny.”

Although Jacob said he can relate to Tom by also being short and funny, he enjoys portraying characters who have a different personality from his own. As Tom, Jacob is assuming the mindset of an adult.

“It’s a great experience,” the young actor said. “It’s fun to be serious and silly, to have another person’s personality.”

Jacob’s opinion about what makes theater performances enjoyable was also expressed by eighth-grader Ben Hahn, who said, “I love doing shows. I get to go outside of my shoes and be someone different.”

Ben plays one of the show’s ringmasters along with eighth-grader Manny Papaterpou. According to Ben, the ringmasters introduce the scenes in a humorous, circus-inspired way. He views the role as a narrator and thinks about how narrators speak while portraying the character.

Taking on the role of a blues singer is eighth-grader Jacquelyn Conforti, who in addition to acting on-stage, appeared in commercials when she was younger. Having taken part in live and recorded productions, Jacquelyn said she has developed a preference for stage performance.

“I love performing and I have really been leaning on performing on stage,” Jacquelyn said. “You can express yourself more.”

A newcomer to the stage is eighth-grader Aidan Elwell, who in addition to being a circus performer, will greet the audience members in the lobby and encourage them to buy tickets.

“I’m the first person the audience sees,” Aidan said. “I’m their first impression of the play.”

Aidan credits his mother and his older brother, Zachary, with inspiring him to audition for “Barnum.” He said Zachary, who played Conrad Birdie in a 2013 production of “Bye Bye Birdie,” helped him prepare for his audition.

To Aidan, Barnum is a narcissist.

“You have to act like a snide, self-centered person,” he said. “He’s a jokester, but he acts serious.”